So how do you go about identifying an earthworm? Firstly in most cases your earthworm needs to be an adult, mature earthworms have a saddle (clitellum) which is part of the reproductive system – forming a cocoon which protects the earthworm’s eggs. Unfortunately only five of the earthworms collected from my garden survey were adults so the rest went back into the garden unidentified.

There are 27 species of earthworm in the UK, some of which, like the Eisenia fetida I found in the compost heap, can be identified in the field, for these you can use the free OPAL Earthworm Guide or online key but others require close examination using a microscope and an identification key. The ‘bible’ for UK earthworm identification is Sims and Gerard (1999) but as Father Christmas was not kind enough to bring me a copy I used Sherlock (2012). This key is published by the Field Studies Council and is part of their excellent AIDGAP (Aid to Identification in Difficult Groups of Animals and Plants) series, it is a perfect step up from the OPAL guide and I highly recommend it - if you join the Earthworm Society of Britain you will receive a copy in their recording pack.

By now I have seen a fair few earthworms so I was reasonably confident without using a key that my two from the soil pits were in the genus Lumbricus, these tend to be dark in colour and often iridescent, but it is good practice to check. In the FSC key Lumbricus and one other genus are separated in the first couplet by the structure of their head. At the head of the worm is a fleshly lobe or prostomium which covers the mouth, in some worms two lines run from the prostomium so from the top it looks like the first segment is split into three, this is known as a tanylobic head and is the type found in Lumbricus (the other type is called epilobic). 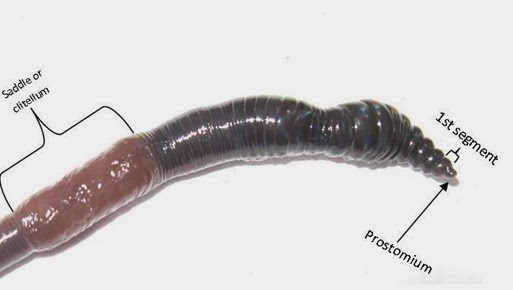 Top view of earthworm head and clitellum (note the iridescence)

The next step is to count the number of segments before the clitellum and how many segments the clitellum covers. This can be quite tricky and I find it particularly difficult on the clitellum were the segments are not as distinct. Unfortunately this was the case with my two specimens so for now I will have to leave them at Lumbricus sp. until an expert at the museum can help me with them, such is the way with identification, especially when you are learning, but with my perfectionist nature I still find this hard to deal with.

Thankfully my confidence was restored by being able to identify the two species I found underneath my log pile, these were both epilobic worms. 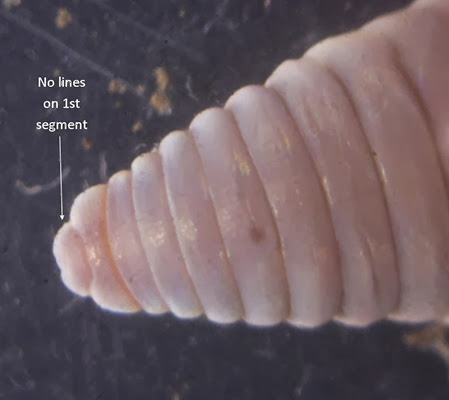 Other characters used in earthworm identification are the position and shape of the tubercula pubertatis (TP for short) which are a pair of raised pads on the side of the clitellum, both my worms from the log pile had distinctively shaped TPs which I recognised from earthworms identified during my MSc project. The larger pale specimen had two bumps on segments 31 and 33 so I recognised it as Aporrectodea caliginosa, one of the most common UK earthworms. The bumps can sometimes be so prominent they can be seen without a microscope. 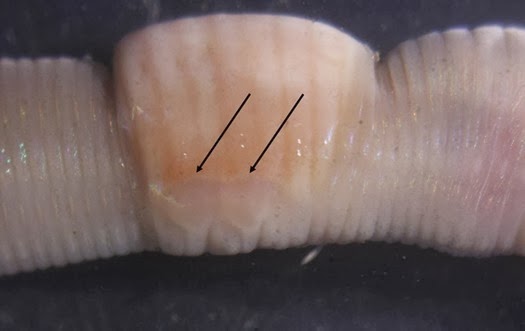 The distinctive two bumps forming the TP of Aporrectodea caliginosa

The other two worms were much smaller and dark red in colour with a crescent shaped bump on the TP which I recognised as belonging to Satchellius mammalis, the 5th commonest species I found in my MSc study site. 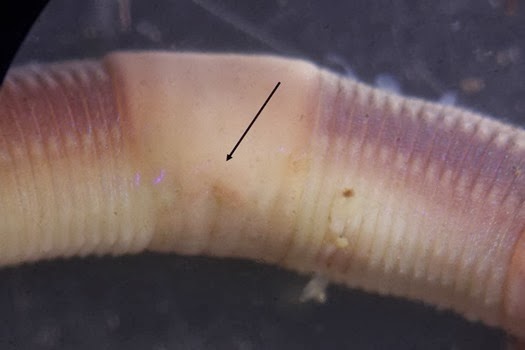 So with just an hour in the garden and I already have 4 or 5 earthworm species ready to submit to the Earthworm Recording Scheme. Why not have a go yourself? For such an ecological important group earthworms are terribly under-recorded and with just a small number of species with good identification keys and reasonably clear identification features they are a nice group to 'do'.
Posted by Unknown

What is Asperger Syndrome?

In 2012 I was diagnosed with Asperger Syndrome, a form of autism that affects how a person makes sense of the world, processes information and relates to other people. Asperger Syndrome is mostly a 'hidden disability' with difficulty occurring in social communication, interaction and imagination, known as the 'triad of impairments'.

For information on Asperger Syndrome and Autism visit the UK National Autistic Society.